Click the image below to view the City Map with the updated council district boundaries. 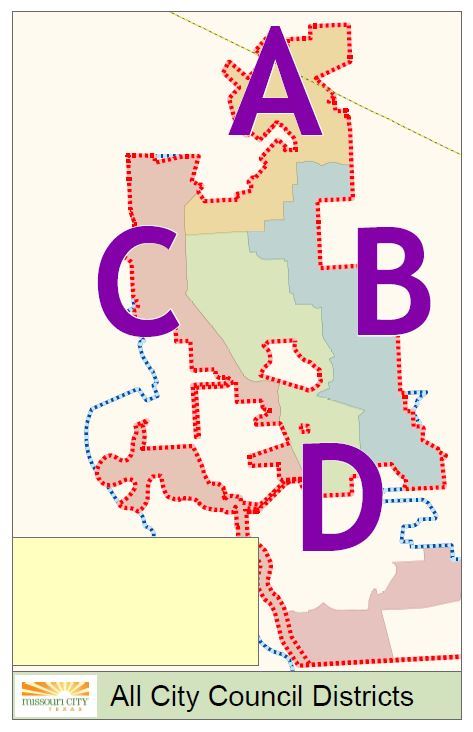 To review each district map with updated boundaries, click on the appropriate links below:

According to the Texas Comptroller’s website, redistricting is the process of redrawing electoral district boundaries for voter representation.

Why is the City redistricting?

Pursuant to Section 3.02 of the City Charter of the City of Missouri City, “not less than once in every ten (10) years, within two (2) years following the date of each decennial federal census, the city council shall determine the boundaries of each of the districts by ordinance adopted according to law.” Redistricting provides boundaries for each single member district so that, “as nearly as practicable,” there is equal representation for equal numbers of people. Based on an initial assessment of the City’s boundaries, the City needs to redistrict.

What are the population numbers based on?

The population in each existing district or proposed district is determined by the 2020 United States Census data. The United States updates its census data once every ten years.

What is the maximum allowable difference in size between districts?

The difference in size between districts must be less than ten (10) percent.

What are the City’s criteria for redistricting?

The City Council adopted Resolution No. R-22-04, which utilizes legally acceptable principles, to create the 2022 redistricting map. Those principles included maintaining traditional neighborhoods, basing any revised plans on existing council districts, to the extent possible, providing for contiguous (connecting) territory, and configuring districts so that they are relatively equal in total population according to the 2020 federal census.

Do comments on the redistricting map have to be in writing?

Where is my Council District under each Redistricting Plan?

To view relevant documents and timeline of the process, Click Here.