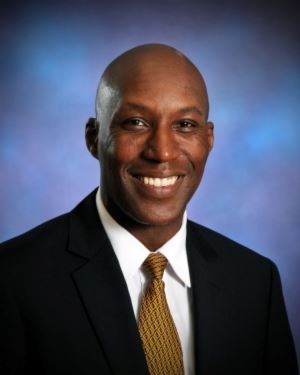 David Jordan brings over 30 years of experience serving in numerous capacities at the federal, state, and local levels of government. He is a dedicated public servant; former city council member, assistant city manager and city manager; and passionate community advocate.

David enlisted in the U.S. Air Force in December of 1989. His career spanned 25 years of service in military law enforcement. He is a decorated combat veteran, having served tours in Bosnia, Iraq and Southeast Asia. He completed numerous assignments across the globe. David has been the director of Installation Security, Force Protection, and Information Security programs and was instrumental in ensuring the safety of the United States nuclear enterprise. Jordan's career culminating at the Police Services Division at the Air Force Headquarters Security Forces Center in San Antonio, Texas. He was responsible for Police Services, monitoring Air Force critical incidents and providing direction and feedback for correction or recognition for Air Force best practices. David received policy guidance from the Air Force director of Security Forces in Washington D.C. and authored Air Force law and order directives. David was responsible for providing force protection guidance, policies, and procedures to more than 37,000 security forces members worldwide.

His proud history of serving local civic and non-profit communities includes being a Commissioner of the Leon Valley Economic Development Corporation, Planning and Zoning Commissioner, Chairman of the Ethics Review Board, Board of Directors of the Crime Control District, Police Citizens Advisory Committee liaison and a member of the Clergy Community Advisory Group, (CCAG).

In March of 2016, he was recognized as the Elected Public Official of the Year from the National Association of Social Workers Alamo Region. Jordan graduated from the Texas Municipal League Leadership Academy and received the 2016 TML Leadership Fellow Award.

He is a former member of The American Legion Post 336 and founder of My Father's Table Food Bank in San Antonio. He served with the South Texas Alliance for Orphans, placing children in foster care in loving homes. He was the Vice Chairman of Voices For Children of San Antonio, sat on the advisory board for School of Science Technology and Discovery (STEM) and is a member of the Community Clergy Advisory Group.

David is nearing completion of his Master of Public Administration from Webster University in St. Louis, Missouri. He holds a Bachelor of Science in Social Psychology from Park University in Parkville, Missouri and an Associate of Applied Science in Police Science from the Community College of the Air Force in Maxwell, Alabama.  David is currently enrolled in the Certified Public Manager Program (CPM) at Texas State University.

David Jordan and his family are honored to serve the citizens of Missouri City.